Prime Minister Abe has announced the formation of a special study group chaired by former Japanese ambassador to the US Yanai Shunji to study rolling back restrictions on Japan’s exercise of its right of collective self-defense in limited cases, including, according to the Yomiuri Shimbun, (1) the use of missile defense to destroy a ballistic missile targeting an ally (i.e., the US, (2) in the event of an attack on allied ships sailing with MSDF ships on the high seas, (3) in the event of an attack on another country’s forces engaged in reconstruction (i.e., in a situation similar to the ASDF deployment in Iraq), and (4) to resist in the case of efforts to obstruct UN peacekeeping operations.

The prohibition on the exercise of the right of collective self-defense is the product of a long-standing constitutional interpretation drafted by the Cabinet Legislation Bureau, which means, of course, that a re-interpretation can make collective self-defense permissible in these cases. But the study group is informal and its recommendations non-binding; as reported in the Japan Times, a move to permit collective defense in any circumstances is likely to draw opposition both within and outside the government.

This is an important step, because it is the prohibition on collective self-defense that has prevented the US-Japan alliance from becoming a proper alliance in which each ally is committed to the defense of the other. It signals that the bounds of acceptable discourse on Japanese security policy continue to expand, and that the expansion of the Kantei’s top-down policy making powers — which may soon include a national security council, the legislation having been submitted to the Diet last week — continues unabated in security policy. Just how much stronger the Kantei has become will depend, of course, on how the collective self-defense review process resolves. 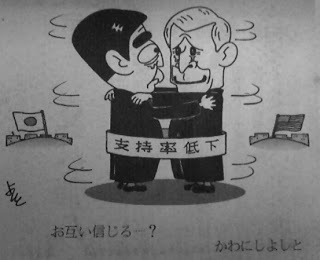 The timing of this study group, meanwhile, is important, giving Abe concrete evidence of his government’s steps to strengthen the alliance to present to President Bush at the end of the month. (The Japan Times thinks that Abe may be trying to change the subject away from comfort women.)

In the case of the latter, at this point I doubt there is much that Abe can do to change the subject, and as for the former, I don’t think the US government will be assuaged by the creation of a study group, given that there is still a long way to go before Japan can be called a “normal” country. The obstacles to embracing even limited collective self-defense are many.

(The editorial cartoon left, from Yomiuri, shows Bush and Abe embracing each other, bound by “falling rates of support”; the captions reads “Believe in each other?”)