With the campaign for the July 21st upper house election set to begin officially on Thursday, the Asahi Shimbun has released the results of its latest opinion polling on the Abe government.
The poll contains good news and bad news for Abe Shinzō.
The good news for the PM is that there remains no doubt that the LDP will win big. When asked who they will vote for in proportional representation voting — which elects forty-eight legislators from national lists — 44% said LDP, 7% each for the DPJ, JRP, and Your Party, Communists 5%, Komeito 4%, Socialists 3%, and People’s Life 1%. Another 19% said they were still undecided. If we assume that the undecideds will break along the same lines as the decideds and that approximately 54 million votes will be cast in proportional balloting (roughly the number of votes cast in the 2007 and 2010 elections), the LDP will win twenty-nine seats, the DPJ, JRP, and YP four seats each, the JCP three seats, and Komeito and the Socialists two seats each.1

To reach the UH majority threshold of 122 seats, the LDP will need to win forty-two of seventy-three district seats, which, given the above figures, should probably be doable. The DPJ happens to be defending forty-two seats, the beneficiaries of its 2007 victory over the Abe-led LDP. The party recognizes it will come nowhere close to that total and will run no more than a single candidate in each district. Reaching the two-thirds threshold of 162 seats, necessary for constitution revision, is probably out of reach, certainly for the LDP by itself since it would fall short even if it were to win all seventy-three district seats.
The bad news is that the Abe government’s headline approval rating continues to head the wrong direction. His approval rating fell another four points, to 54%. 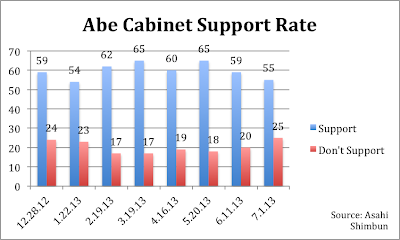 More significantly, the Japanese public is no more enthusiastic about Abenomics than it was in early June. In response to the question whether they approve of Abe’s economic policies, 50% said yes, while 31% said no, virtually identical to last month. (Although this time the poll asked whether respondents approve or disapprove, whereas earlier polls asked whether they thought Abe’s policies were promising for growth.) Meanwhile, there was a slight uptick in the percentage of respondents who did not believe that Abe’s policies are linked to higher wages and employment, 48% compared to 32% who believe they are.

Meanwhile, when it comes to two of the biggest questions facing the Abe government — whether to restart nuclear reactors and whether to raise the consumption tax rate on schedule in April 2014 — the public remains firmly opposed to both. Only 29% support restarting the reactors, with 53% opposed, a slight decrease from last month, but without a corresponding increase in support. 51% of respondents said they opposed raising the consumption tax, with 37% in favor. The public also remains opposed to revising Article 96 of the constitution, with 47% opposed and 34% in favor.
There are a couple bright spots for Abe — nearly 50% approval of foreign and security policies, 50% in favor of Japanese participation in TPP —but on the whole the impression is that public excitement about Abenomics has cooled. The public will give Abe a majority in the Upper House this month, but the days of unbridled enthusiasm about the Abe program have passed. Perhaps that shouldn’t be too surprising, given that recent economic gains may not have reached Japanese households yet. Abe’s overall support numbers may get a bump from the election, but it is increasingly clear that the important number to watch are public attitudes to Abenomics, which seem to determine the strength of Abe’s public support.
1 PR seats are apportioned using the D’Hondt method. I made these estimations using this calculator.↩